Not long ago, Robert and Leslie Black found a painting of flowers online offered for sale by a man in North Carolina who used to live in Greenport. The characteristically bold brushstrokes and signature identified it as a work by early 20th century artist Caroline Bell.

Now, the work has been cleaned of a thick layer of old varnish and is on the way to its new home in Laurel. “The house has been completely renovated, and our client already has a whole wall dedicated for it,” said Robert Black. The couple owns the Old Orchard Farm Store in Orient Village; all around are dozens of works by local artists, both vintage and contemporary, that they find on online auctions or by word-of-mouth. “It’s like a treasure hunt,” he said. “You just never know what’s going to turn up.”

The Blacks have made it their mission to seek out high-quality, locally-made art and bring it “home” to the North Fork. In all, they have repatriated more than 75 works from around the country and overseas. “It gives us a lot of satisfaction to bring them back,” said Black. “When someone out here buys a work that comes from the area, or shows a local scene, it becomes an instant family heirloom. It’s now part of a family again, and that breathes life back into them. Sure, these works could go to a museum, but most of them would probably just sit in storage and rarely get seen.”

Caroline Bell is one of a group of artists from roughly the 1880s to 1960. Their works were relatively unknown until about 15 years ago, when East End art dealer and collector Terry Wallace dubbed them the Peconic Bay Impressionists and brought them to the attention of the art world with a show. This was followed by a book, “Caroline M. Bell and the Peconic Bay Impressionists.”

These artists weren’t affiliated in real life, unlike the members of the more famous Peconic Art Colony.  And they weren’t all impressionists. Instead, they painted local landscapes, buildings, boats, life on the farms and on the water. Some were trained artists, but many were self-taught. “They were farmers, commercial fishermen, teachers, housewives – all working people,” said Black. “This is what they did as a hobby, or to make some money in the summer.”

Caroline Bell has emerged as the most iconic. Her still-lives and landscapes are atmospheric studies of light and shadow, weather and nature, using thick daubs of paint in an evocative, impressionistic way. The Bell paintings at the store are joined by works of sailing ships by Albert Latham, farm scenes from William Steeple Davis, Rachel Beebe, the “Brooks Brothers” – Franklin Glover Brooks and Eliot Alvah Brooks, C. Hjalmar “Cappy’ Amundsen and more. Contemporary artists include John Crimmons from East Islip, Carolyn Bunn and Alan Bull. The works come in all sizes and range from about $250 to $4000. Another collection is of authentic vintage maps. The store also carries a small selection of higher quality North Fork antiques and gifts, such as vintage oyster plates, model boats, decoys and jewelry.

The Blacks have generational roots in Orient through summer homes, and the gallery store has been in the family for more than 30 years. When they retired five years ago, they started collecting art in earnest. Before long, they launched into creating, planning and executing a number of art shows a year. “We started this thinking it was going to be a little summer thing,” Bob said, laughing. A show in February on the Peconic Bay Impressionists was well attended. “We sold as much this winter as we did in the summer,” said Black. 2019 events include a July show called “Birds and Barns of the North Fork” and another show in November. The website, oldorchardfarmstore.com, has information and links to the Instagram and Facebook pages.

The Blacks have come a long way since they started collecting when they got married in 1983. The first painting they bought together was by the late Greenport artist Rich Fiedler. It depicts the Orient Yacht Club, a local landmark perched out at the end of a long jetty in Orient Harbor, used by generations of local boaters.  “It was our wedding present to ourselves,” said Black. “It was just a couple hundred dollars, but that was a lot of money for us in those days!” 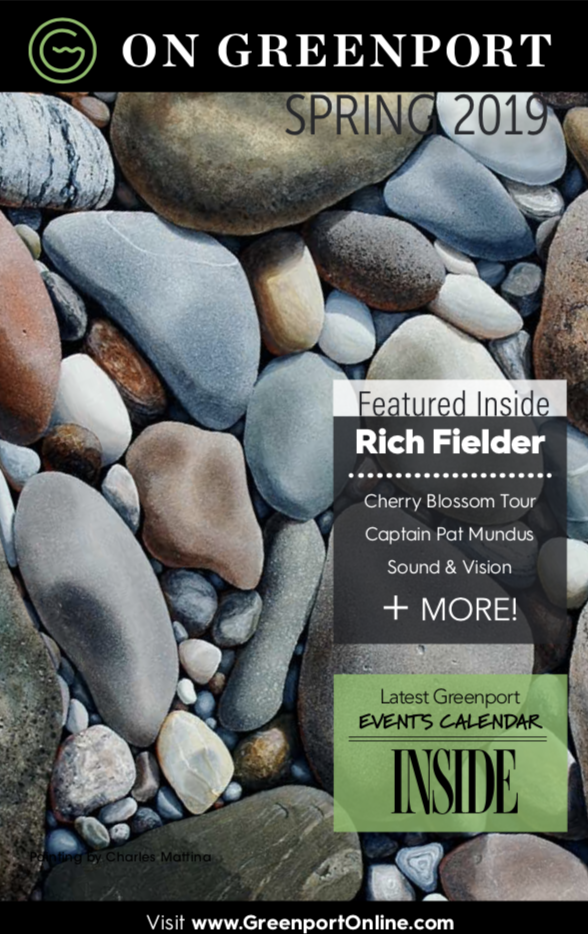